Woops, it’s been a few months since I last did any book reviews. Aaaand that’s because I haven’t read many books to review! Moving and switching from having a commute to working at home both led to my reading plummeting. (Plus, I reread the entire Lunar Chronicles series in anticipation of the final book, Winter, and that didn’t help either!) So here’s a few of the books I’ve managed to read in the last couple of months anyway.

I was so happy to get this from my library relatively soon after it came out. I only knew of Day from a few things, mostly from Dollhouse, but I knew she was a nerd fan-favorite, and was watching her Youtube series within a few chapters. You’re Never Weird on the Internet (almost) cemented celeb memoirs as some of my favorites, especially if they’re written as funny and intelligent as Day’s.

WHY NOT ME?
Mindy Kaling

By the time I was halfway through Kaling’s latest, I’d started and marathoned at least the first season of her show, The Mindy Project. What can I say? Reading or watching Mindy begets wanting to read or watch more Mindy.

On the other hand, I hardly remember anything from the book now, a few weeks later. So, nothing life changing, but definitly entertaining. I still prefered her first book, Is Everyone Hanging Out Without Me? That one, I may actually reread sometime. This one? Probably not. 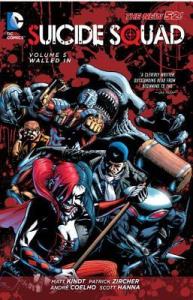 In the interest in keeping the spark alive in my friendship with my best friend from my home town, I read the first 5 volumes of the new suicide squad for her. She loves Harley Quinn, and now I do too.

These are definitely dark, it’s the Joker’s girlfriend and a team made up of criminals with do-this-or-die commands after all, but it’s dark fun, and I won’t complain if she keeps handing them to me to catch up whenever I visit home.

What’s up next? Well, hopefully some reading will start happening again. ;)