After 10-book-January, I really wasnt suprised to hit a lull month right away. I am a little bit perplexed at it continuing well into March, but not too concerned. I have too many other goals I should focus on this year to worry too much about my reading goals–as long as I am reading. 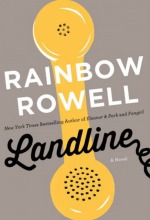 LANDLINE  Rainbow Rowell
Rowell has written four books, and Landline was the only one I hadn’t gotten to yet. I knew it was quite a bit different from E&P and Fangirl, both of which I marathoned through at the end of last year, so I didn’t mind waiting a while on the holds list.

I liked Landline. I know I’m not alone in feeling that it didn’t live up to everything I adored with Rowell’s last two books, but withough the comparison, it’s an interesting women’s fiction sort of book with a magic phone mixed in for kicks. 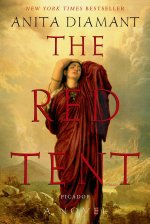 Last July. Andie took me to the Newberry Library’s book fair (after getting over her disbelief that I’d never heard of the thing). I was immediately disappointed that it was the last day and that I only had a few minutes, but I managed to pick up four or five books anyways.

And then I read none of them. Nothing I’d bought had actually been on any of my TBR lists, and I was reading a lot more recent books, so the stack just graced my shelves (an admirable purpose, but still).

Till for no apparent reason last month, I declared that enough was enough with all of my unread paperbacks, and picked one more or less at random (ie, from the closest shelf to my bed.) And was hooked, like, instantly

The Red Tent won me over so fast that I could probably justify a cliche about whiplash. It was right up my alley, even if it was an alley I’d forgotten about for awhile: historical/biblical fiction.

You have to go into a book like this expecting the author to take artistic license, and if you can do that, it’s beautiful. 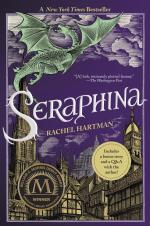 I just finished rereading this last week, but I don’t want to wait to write a few words about it, because by March Quick Lit I fully intend to be gushing about the sequel. (Which is currently ‘out for delivery.’ Which, weirdly, doesn’t always mean it will definitely come today.)

I. Love. This. Book. I’d forgotten how good it is, but rereading it was brilliant. When I like a book this much, I’m much more aware of how inadaquare I still am at reviewing and at explaining a book, but I can try.

“I became the very air; I was full of stars. I was the soaring spaces between the spires of the cathedral, the solemn breath of chimneys, a whispered prayer upon the winter wind. I was silence, and I was music, one clear transcendent chord rising toward Heaven.”

Hartman’s writing isn’t always this lofty sort of stunning–that would get cumbersome–but it is always good. Seraphina is a brilliant protagonist. She’s cranky sometimes, and I love that. The story tells you she’s smart, sometimes in particular ways that make sense with her particular background, and the character doesn’t betray that.

I look forward to writing about the sequel soon!

One thought on “Quick Lit [March]”