So let’s talk about how I obsessively read ten books in 31 days, which is likely a new record for me.

(And then have only finished one book in the two weeks after).

Actually, “I obsessively read ten books” is just about all there is to say. It was sort of magical. And since it was only January, my “Am I reading enough?!” stress was mostly absent.

Which reminds me: I tried not to set a goal for this year, but when Goodreads won out (85 books for 2015, go!), I unofficially set another: to stop letting reading and reading goals be a stressful thing.

We’ll see if I manage. 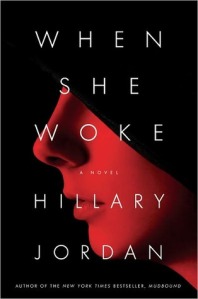 Back in July when I mentioned The Handmaid’s Tale (which I loved) in a post, When She Woke was recommended to me as a sort of mix between that and Scarlet Letter. Now, I honestly hated Scarlet Letter, but the comparison makes me wonder if I would like it better now that I’m not 13.

Jordan tells the story of a young woman who’s skin is colored bright red as punishment for having an abortion–and refusing to give up the father when caught. She’s now a Chrome, part of a system intended to ease the jail system in a sort of dystopian, future America by forcing convincts to ingest a virus that paints their skin and makes them walking billboards for their crimes. Reds are murderers. Her story weaves throuh a twistedly religious “home” of sorts for female Chromes, an attempt of her life by a religious cult/subsect who consider it their duty to murder women who have committed abortion, and her rescue and journey to freedom through an underground railroad of sorts constructed by a group of hidden pro-choicers.

Regardless of your pro-life or pro-choice stance, it’s a fascinating dystopian look into the cultural and societal issues of discrimination, adultery, rape, the right to privacy, and women’s rights. 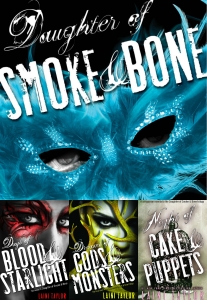 DAUGHTER OF SMOKE AND BONE
& DAYS OF BLOOD AND STARLIGHT
& DREAMS OF GODS AND MONSTERS
(also: NIGHT OF CAKE AND PUPPETS)

For  whatever reason, I had been expecting these to be frivolous, throwaway urban fantasy. It makes no sense: they were beloved by several book bloggers, so there’s no reason I shouldn’t have expected more. I definitely got more.

Given that this is three books, I’m not going to put myself through the agnony of trying to summarize it. Just this: fantastic so-called “monsters,” magic, other worlds, great characters, teeth, “angels,” and wishes.

And the best follow-up novella I have ever read.

I read this for one reason: to read something recent. I’m not even certain I knew it was post-apocolyptic, or anything else about it, when I put it on library hold: just that it had come out in the past few months and was at the top of a few lists for the year. Those aren’t the best reasons to read something, so thank goodness it all worked out.

I almost surpised myself by how into it I was by the end, and now much I wanted it to continue, because it took me a little bit to get into. The author jumps around in time quite a bit, both before and after the epic virus that nearly wiped out humanity, but I didn’t have a problem following her.

THE BOOK OF LOST THINGS

I struggled to finish this one. I may even have only done so because I got this from paperbackswap and it seemed a shame to waste a spent credit. It seems to be quite a love it or hate it book for most people, so at least I’m not alone.

I didn’t care much for the protagnoist (spiteful little boys can be grating, even when the book keeps telling you they are actually quite clever and probably good at heart), and the book didn’t really give me stakes I cared about till near the end. That said, I did enjoy the last quarter or so, but I’m still suprised I got there.

I hesitantly expected this to be really good, coming from the author of What Alice Forgot and Big Little Lies, and while I’ve heard that her earlier work doesn’t live up to those two latest, The Husband’s Secret totally does. (And while looking for release dates, I just read that this was the first book that went big for Moriarty. I can see why.)

Secret follows three womens’—and their families’—lives as they intertwine around a decades-ago murder. I definitely see a resemblance in style and framing with Big Little Lies, but didn’t feel it detracted from the story at all.

Ok, so that’s only 7 books (and one Novella): but I swear I did read ten. Maybe I’ve decided that  less reviews is better. Or maybe I’m too embarrassed to review my first romance novel and not quite sure what even to say about the brilliant, dark, squirm-in-your-seat graphic novel from Neil Gaiman. Or I’m lazy. The first one definitely sounds more legitimate, so we’ll go with that!